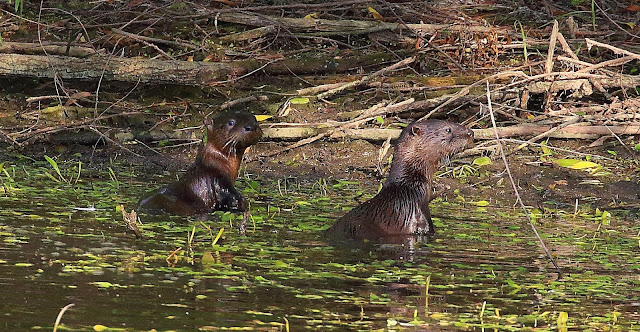 Mom, where are you!  These two Northern River Otters were wondering where their mother had gone to.  Initially, all three were swimming around Pond J.  After a bit, the mom caught a large fish and was seen scurrying off into the vegetation, as if she didn't want to share the meal with her pups.  The two pups continued to swim around the center of the pond before they realized that she wasn't there anymore.  After swimming to the west shore, they exited onto the bank, and after a few minutes also disappeared into the vegetation.  Not much later, all three were relocated at Pond G. (Wolf. Oesterreich, 7/26/20)
Posted by Kevin Kane at 9:09 PM