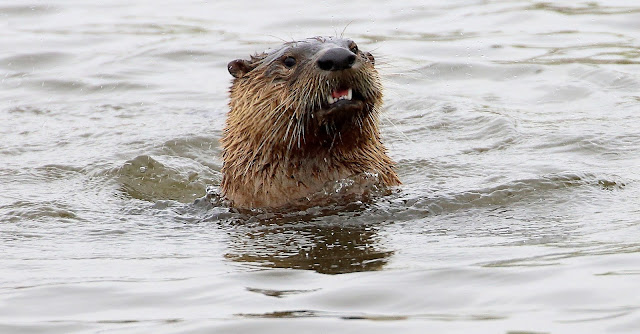 While I was on the Upland Trail I received 2 texts from Tana Tesdall, telling me that she found 3 Northern River Otters on Pond O.  They soon moved on to Pond M.  (Both Ponds are in the south wetlands complex, by Stone Brooke.)  During my 2nd lap around the main lakes I checked out Pond M and then parked my trike at Pond N's outlet.  I made a quick scan of Pond N before following a footpath to Pond O.  So far no otters.  I returned to Pond N and scanned the western shoreline.  I soon found 2 American Minks scampering over and around the American Beaver lodge.  One was larger than the other, so they could have been a parent and an offspring.

Then about 10 feet to the south a large head popped out of the water.  This Northern River Otter hauled out onto a log, soon joined by a second.  A third head was seen in the water, but this one swam off to the south.  Both otters dropped back into the water, with one of them returning to the log.  The larger mink made its way along the shoreline, but stopped short when the otter was spotted.  Quickly, the mink turned around and headed back to the lodge area.  While all this was happening, a Common Muskrat swam towards the lodge and then exited onto the shore.  The remaining otter dropped back into the water and swam off towards the east shoreline.  The mink took the opportunity to quickly scamper south along the shoreline, eventually disappearing into the vegetation.  The heads of both otters popped out of the water, about 20 feet from me.  This is when they saw me and started to snort (sounded like they were blowing air out of their noses).

They swam underwater towards me, popping up every so often.  They came as close as 10 feet, swimming back-and-forth.  I returned their snorts, which seemed to intrigue them.  Eventually they grew tired of me and swam off.  These were the first otters I've seen this year, although Paul Domoto and I have found their poop piles.  (Two were seen by Steve Dinsmore on the 6th, swimming in the north lake.)  This experience was also the first time that I have had of these three species all within 10 to 20 feet of each other. (Wolf. Oesterreich, 4/11/21)