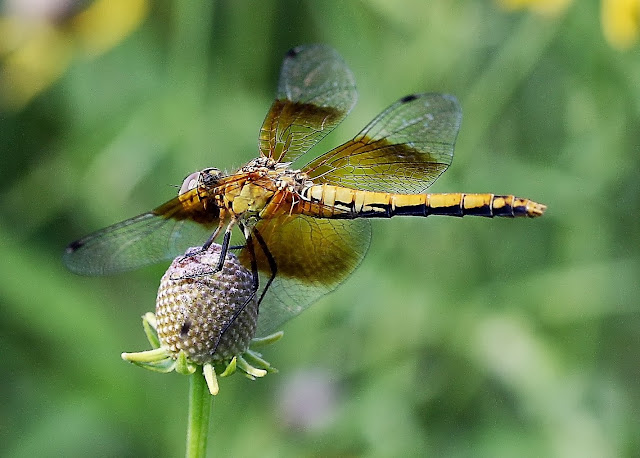 
I took a walk along the north shore this evening. I did not bring my camera along because I told myself I just needed the exercise, no time to look for insects. I was looking directly into the sun and its reflection off the water . As I walked with my head down, it was difficult to see much more than the path in front of me. Nevertheless, the glistening wings of a small dragonfly caught my eye as it flushed from the nearby vegetation and flew out over the water a short distance. I continued to watch it as it landed on a large rock very near where I was standing. Now the sun was to my right and behind me as I looked at the insect with my binoculars. I could see that it was a female Meadowhawk. The body was brownish green, and the wings were clear except the venation on the leading edge of the forewings was reddish-orange. Each wing had a small yellow spot bordered in black near the tip. After a few minutes of study, I concluded it was a Saffron-winged Meadowhawk. The Variegated Meadowhawk has a lateral stripe and diamond-shaped patterns on the abdomen but the abdomen of this girl was nearly uniform in color. I regretted leaving my camera at home.
As I walked along the path, I saw a second female of this species, a male Familiar Bluet (damselfly) and a female damselfly that I could not identify. When I got home I confirmed my identification of the dragonfly in my reference book but the female damselfly will remain an enigma.