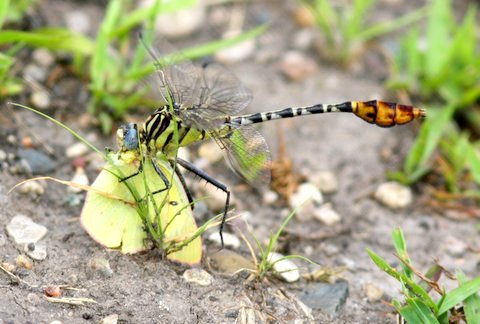 Flagtailed Spineyleg dragonfly with an Orange Sulpher butterfly in its mouth. 7/26/15 (Erv Klaas)

I walked the north shore along my usual path looking for dragons and damsels. On the walk out, I spotted what I thought was a Jade Clubtail dragonfly but it flew before I got a good look at it. I was especially looking for another Clubtail, the Flagtailed Spineyleg. I saw four male and 1 female Widow Skimmers. A male Prince Baskettail was patrolling the shoreline and harassing the Widow Skimmers.

Several large fish were surfacing about 30 yards off shore causing schools of smaller fish to jump ahead of them. These were probably large hybrid striped bass that the DNR stocked a couple of years ago. These fish grow very fast and are known to feed on shad that are over abundant in the lake.
As I continued on I photographed two pairs of damselflies which I believe were Blue-tipped Dancers. An Eastern Pondhawk landed in front of me on a large rock and a Blue-fronted Dancer flitted around in the vegetation near my feet. A Halloween Pennant perched near me on a willow tree.
I noticed a large clump of Swamp Milkweed in bloom along the trail and I smiled hoping that Monarch Butterflies would find it and lay their eggs on its leaves.

I decided to retrace my steps and look for that Jade Clubtail. About one-third of the way back, I spotted a Flagtailed Spineyleg perched on a rock near the water. When I raised the binoculars to my eyes I could see a Jade Clubtail on another rock just beyond it. I walked carefully around the two dragonflies so as not to disturb them.

When I neared the fishing dock at the end of the path, I saw another Jade Clubtail and as I was watching it, a Flagtailed Spineyleg dashed in front of me and nabbed an Orange Sulfur butterfly. The Spineyleg immediately landed on the ground in front of me and I was able to take several photos of it with the butterfly securely in its mouth. After a few minutes it flew off carrying its prey.
Before going home, I drove down Grant Road along the west boundary of the park. Grant Road has been under construction for several months, in preparation for paving it to enable new housing developments on the west and north side of the park. A small temporary pond was located next to the road at the site of a future small parking lot for the park. This pond was teeming with life. I counted 35 Canada Geese, mostly families of adults and young, undoubtedly broods raised on the park this summer. Four Mallard ducks were dabbling in the shallow water. Nine Killdeer, two yellowlegs (probably Lesser), one Spotted Sandpiper, and one Pectoral Sandpiper were feeding on the edge of the pond. Dragonflies and Damselflies included Common Whitetail, Common Green Darner, Wandering Glider, Black Saddlebag, and several unidentified Bluets.
You never know what you will see at the park on a hot day.