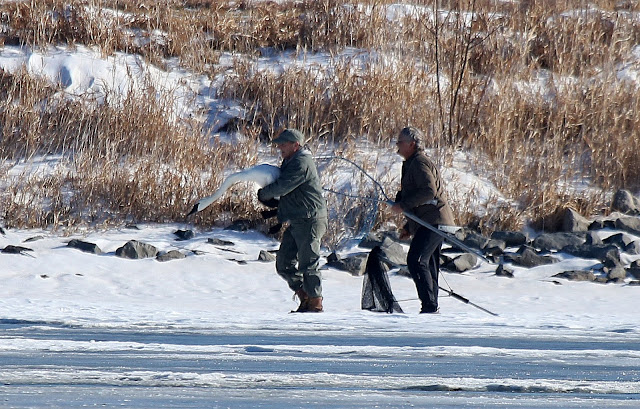 Bruce Ehresman and Wolf. Oesterreich take swan off the lake. (Photo credit: Carl Kurtz)
Since the last day of December, on the day I also found the first dead Trumpeter Swan, I made a note of an adult swan that didn't fly off with the others to feed.  Over the following week I did notice that this swan was capable of flight.  Even though the swan took flight with others, the swan returned almost immediately and then remained as the only swan left.  After that first week I never saw the swan fly off.  On a couple of occasions I watched a pair of adult swans fly in and then swim over to this swan.  However, this swan didn't like that and trumpeted loudly until the pair swam off.  There were other times when this swan would vocalize.  Without trying to anthropomorphize too much, the vocalization appeared to be quite plaintive and sad sounding.  On the late afternoon when the carcasses were collected, Marlene, Nate, and I watched a family, consisting of 1 adult and 4 immatures, land on the open water.  This single swan swam over to them and there appeared to be some recognition between the adults.  The following morning I found this swan with the family.  They eventually flew off to feed, leaving this adult behind.
Marlene Ehresman (Iowa Wildlife Center) made the decision that it was time to rescue this swan.  She gathered a team (which consisted of volunteers from the IWC, members of Friends of Ada Hayden Heritage Park and Big Bluestem Audubon Society, Ron & Emily from Ames Animal Control, and friends & family) and we met at 1330 on Saturday.  We biked, walked, or drove to the bridge and mini-shelter area.  Nate Troxel was ready with his kayak.  Marlene sent the volunteers out to the shoreline.  However, Bruce Ehresman (soon to be retired from the DNR) and I noticed that the swan was now on the ice, among the Canada Geese and Mallards.  Being somewhat non-conformists, we headed out onto the ice from the mini-shelter.  With YakTrax on our shoes and nets in our hands we made our way over towards the swan (to the south side of the open water).  Eventually the geese and Mallards flew off, leaving the swan alone.  I aimed to get in front of the swan, which was moving to the southeast, while Bruce approached from behind.  We noted that the swan was not steady on its feet, falling down a few times.  With the swan's attention on me Bruce was able to sneak up behind and net the swan.  By this time a crowd had gathered on the trail and clapped and cheered when the swan was captured.  Bruce got a hold of the swan and I removed the net.  The accompanying photograph (taken by Carl Kurtz) shows Bruce carrying the swan, which never struggled, and me with the nets.  Marlene and some of the volunteers raced along the shoreline with a cage and blankets.  Bruce mentioned how light the swan was, not a good sign.  The swan was placed into the cage and then two volunteers carried the cage up the slope and along the trail back to the bridge, where the Animal Control van was.  The swan was taken to a vet.  She stated that the swan was emaciated.  She also had a hard time obtaining a blood sample, but finally succeeded.  The sample would be tested for lead poisoning.  When more information is available, I'll pass it on to Kevin.
Big thanks to all involved!
Wolf. Oesterreich
Update:

22 JAN - The rescued Trumpeter Swan has very high lead levels.  The vet has started chelation treatment  (to clear the toxin from the body).  The swan won't eat on its own, so they are tubing it  However, the swan does and will drink water.

28 JAN:  The rescued Trumpeter Swan is still "hanging in there", as relayed to me by Marlene Ehresman.  Both carcasses had lead toxicity.