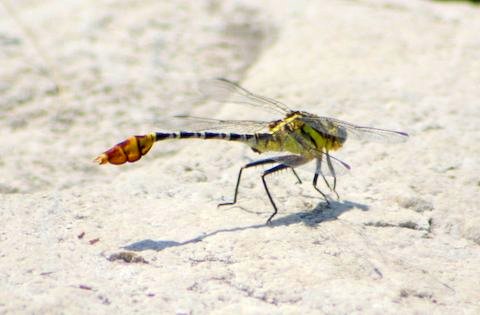 Flag-tailed Spinyleg (Dromogomphus spoliatus) that I took this morning (July 4). Look closely to see the big blue eye through the wing.   I love the names of this bug! (Erv Klaas)

I parked in the north lot and slowly walked the north shore of the lake looking for damsels and dragons, especially my favorite dragonfly which usually shows up along this stretch of shoreline every July. I saw no dragonflies and only a few damselflies: 2 male Blue-fronted Dancers, 1 male Powdered Dancer, 1 female Familiar Bluet, and 1 male Eastern Forktail.

I then hiked up to Jensen’s Pond and spent a couple of hours here. I saw only one damselfly species, 2 male Eastern Forktails. Dragonflies were very active. I identified nine species. Blue dashers were perched on dead limbs along the shore, occasionally flying short distances to chase away an intruder to its territory or to court a female. These medium sized dragonflies have big green eyes, a blue abdomen with a black tip and amber wings which they tend to point forward when perched. The most abundant species at the pond was the Widow Skimmer. Males, conspicuous with their black and white spotted wings were patrolling every stretch of the shoreline as were Twelve-spotted Skimmers and Common Whitetails. A female Whitetail came by tapping the water with her tail as she laid her eggs while a male hovered over her ready to chase away other males. Blue and green male Eastern Pondhawks were courting the green and black females that were also depositing eggs in the shallow water. The comical Halloween Pennants were there too. Black Saddlebag pairs flew by in tandem and then a Red Saddlebag pair came by. The air was heating up and the dragonflies had nothing but sex on their tiny minds.

I was running out of drinking water so I headed back down the hill. I decided to retrace my steps along the north shore on my way to the parking lot. And there it was: a spectacular big male Flag-tailed Spinyleg (Dromogomphus spoliatus) perched on a large white boulder near the water. I had my camera ready and managed to get a couple of photos. As I slowly edged around to get a better angle it flew off. Don’t you love those names.