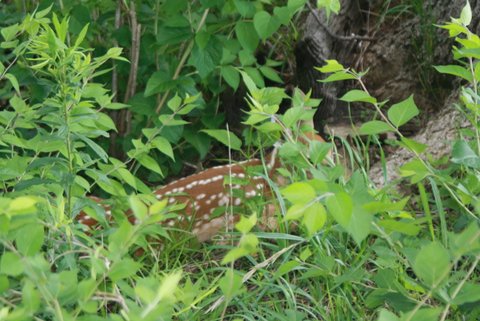 I went to the park today specifically to pull musk thistle. I worked in the area north of the shelter westward and along the ridge. Although there were no dense patches, individual plants covered a large area. Because of the nice rain that fell Thursday, the thistles were easy to pull. I wore heavy gloves, of course. They were also easy to see; most were taller than the other vegetation. I worked my way to the west side of Jensen's Pond and then headed back. I left the trail and planned on passing to the west of the old wooded fence row that runs east-west. As I approached the trees on the west end of the fence row I saw a small fawn walking through the grass. The fawn still had its spots and probably was no more than a week old. I stopped and watched it disappear into a large depression. I took my camera from my bag and walked slowly towards the area that I last saw the fawn. When I got about 25 feet away, a doe jumped up and ran south. I took a few more steps and saw the fawn laying in the grass. It raised its head and looked at me as I took a picture but the vegetation blocked most of its body. I took a few more steps, hoping to get an unobstructed view, but the fawn bolted and ran in the direction that the doe took.

I took the path along the shoreline of the north lake watching for damselflies and was rewarded with my first sighting this year of a male Powdered Dance on the rocks next to the water. It was a good day all around.