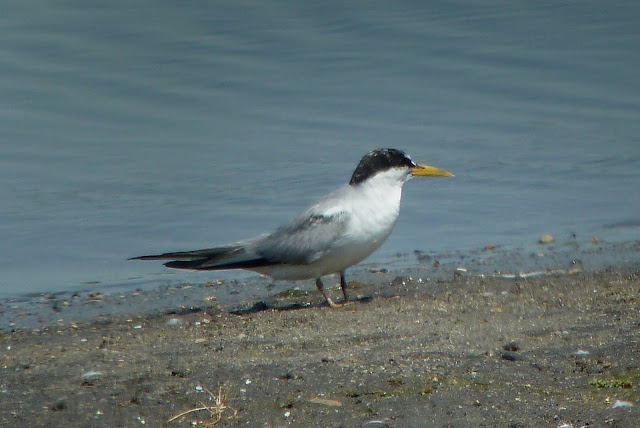 Least Tern on mudflat in southwest corner of the south lake, 8/24/12 (Wolf Oesterreich)

This Least Tern was found Friday afternoon and represents a new species for the Park List (#259).  According to "The Birds of Story County, Iowa", 3rd Edition (July 2001), by Stephen Dinsmore and Hank Zaletel, this bird may represent only the second record for the county (1st = 13 June 1990 at Colo Bogs).  The bird appears to be loosing its breeding plumage.  The tern was found at 1420 on a mudflat located in the SW corner of the south lake (where the south wetland complex drains into the south lake).  I managed to extract two of the tripods legs when it flew off for the first time.  However, within minutes it was back and I was able to obtain a few (not very clear) digiscoped photographs.  After several more minutes it took flight again and I never saw it again.