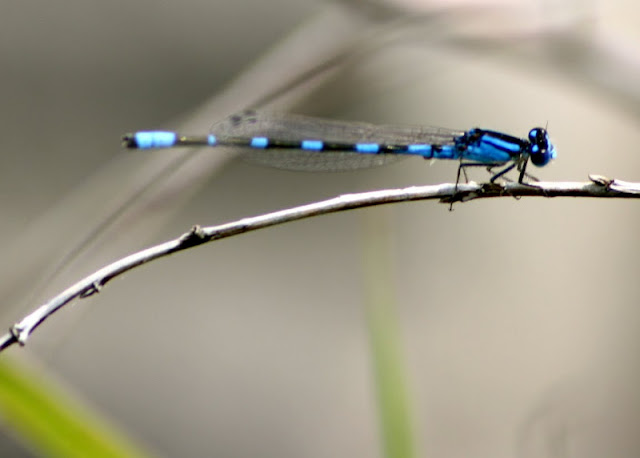 You haven't received a field note for a while because I've been traveling. Today was my first visit to Hayden Park since I returned. I walked along the north shore of the lake looking for odonates but I was disappointed. I saw one Powdered Dancer, one Blue-fronted Dancer, one Tule bluet, and 2 Prince Baskettails (flying). In past years, I can remember seeing 8-10 species and dozens of individuals. The water level in the lake is low due to the pumping but the habitat has not been affected that much. Lots of Sago pondweed growing along the shore where damselflies like to perch.

Todd Burras reported seeing a large swarm of hundreds of Common Green Darners near Jewel, IA, along Hwy 69. I received on other report from a friend of a large swarm east of Nevada. This species is known to migrate to the Gulf Coast in the fall. The swarms could be feeding frenzies where the dragonflies feed on smaller insects. Or, they could be looking for the rise of warm air columns to take them to a higher altitude where they catch stronger tail winds that will carry them south.

Janet and I drove to Gatineau, Quebec (across the river from the capitol city of Ottawa, Ontario) where we visited our son Zak and his family. I didn't have much time for nature study except for a brief drive through a wildlife refuge near the Ottawa River. Then we visited the big city of Toronto where I attended a conference on Urban Agriculture. Jan visited with an old friend from high school in Kansas City. On the way home we stopped at Point Pelee National Park for a few hours. Point Pelee is a narrow peninsula that juts out into Lake Erie about 30 miles southeast of Detroit, Michigan. We arrived late in the afternoon of August 18 and walked out on a nice boardwalk in a large cattail marsh. Small flocks of Great Crested Cormorants flew over us for 15-20 minutes headed southwest. Hundreds of damselflies were perched on waterlilies and other vegetation in the marsh. With binoculars I was able to identify these as Eastern Forktail damselflies. A small percentage of them were newly emerged immatures, which are orange in color, much different from the adults. The next morning we visited the park's visitor center and a small pond near the entrance had dozens of green tree frogs and leopard frogs perched on rocks and vegetation. Point Pelee is known for the large number of Monarch Butterflies that congregate during the fall in preparation for their long migratory journey to Mexico. However, we were a little too early for the Monarchs that reach their peak numbers in late September.

Its time to think about the fall interpretive programs. If you have an idea for a new program, please let me know and we'll try to set something up.