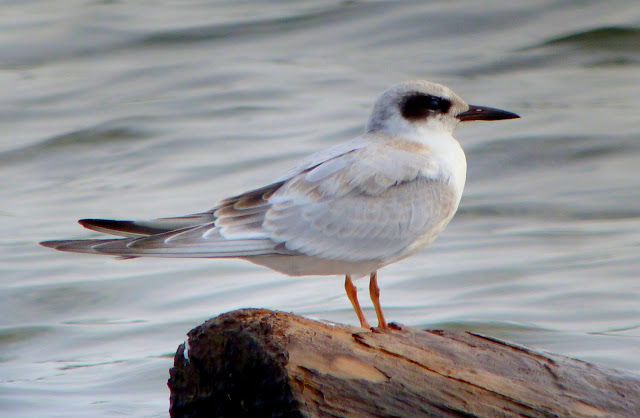 This juvenile Forster's Tern was found on a piece of driftwood, located next to the shore (at a point between the bridge and the mini-shelter to the west), 9/23/12 (Wolf Oesterreich)

I parked at the Harrison Road lot and walked the narrow path to Pond H in the middle wetland complex. Ponds L and H still have water in them but areas along the shore that are normally covered with shallow water were dry enough to walk on without getting my shoes muddy. I flushed several Song Sparrows and a Sora Rail from the weeds along the shore and a Sharp-shinned Hawk flew out of the willows on the west side of the pond and disappeared into willows on the east side. I picked up a full bag of trash, (including a computer keyboard!) and deposited it in the trash can near the Paul Errington heritage rock.
I then proceeded to the north wetland complex. Along the way I saw pairs of Cherry-faced Meadowhawks in the grass along the trail. Pond G, the first one in the complex that receives water from Grant Creek, is bone dry. Except for cracked mud in the deep center, a dense stand of vegetation covers the pond. I identified witch grass, barnyard grass, smartweed, giant and yellow foxtail grass and nut sedge. All of these plants produce abundant seed and large numbers of sparrows and several pheasants were taking advantage of the food. I also noticed several large blue vervain (Verbena hastala) and yellow cress (Rorippa islandica) plants blooming. I walked through the dry wetland and climbed over the weir into Pond E. This pond still had a considerable amount of water although the shallow parts were completely dry and sparsely vegetated with smart weed. Just as I was climbing over the weir a Turkey Vulture landed on the west shore near what looked like a dead animal. After taking several photos of the bird feeding on the animal I chased it off and identified the animal as a dead raccoon that had been dead for a long time. A little farther along the shore was a dead carcass of a Turkey Vulture. I continued walking around the pond and observed a blue mosaic darner (dragonfly) flying over the water but I could not identify the species. I also jumped a white-tailed deer from the willows.

On the way back to the car, I saw dozens of American Goldfinches flying over the prairie and a few song sparrows.