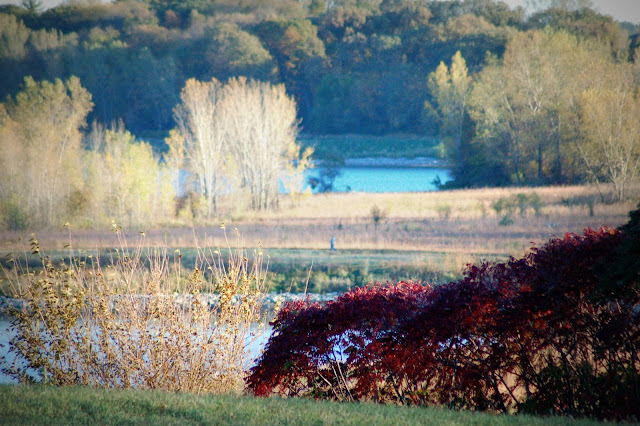 I started out on the upland trail from Harrison Road and headed north. The wind in my face felt cold and I was glad that I had worn a warm jacket. I took the dirt path through the prairie to Pool G retracing my route of last Sunday. The willows surrounding the wetland helped shield me from the wind and the temperature became more pleasant. The vegetation in the wetland had more sparrows than the last time I was here but they were elusive and difficult to identify. The birds would flush in front of me, fly a few yards and dive into the vegetation. Once in a while, one would land in a tall weed or willow where I was able to get the binoculars on it. I saw Song Sparrows, Tree Sparrows, Dark-eyed Juncos, and possibly a LeConte Sparrow. I did not hear or see any pheasants.

I continued on to Pond E where last Sunday I saw the Turkey Vulture feeding on a dead raccoon. The raccoon was gone today. Most of the vegetation was dead and brown except for fall white asters. Then, I happened on to a totally green plant with yellow flowers tucked back into the willows along the shore. It was Sneezeweed (Helenium autumnale), a member of the sunflower family; the same species as I have growing in my rain garden in front of my house. The center button of this small sunflower is yellow and each of the turned-back ray flowers have three scallops or indentations. My garden plants went to seed weeks ago. Why was this plant thriving here in early October? Perhaps a seed blew in late in the summer and found enough moisture in this sheltered area next to the wetland to get a head start on next year. Anyway, it was a pleasant surprise to find it among all of the brown fall vegetation.

On the north side of the pond, I found a deer trail through the willows and witch grass that headed east toward the north lake. When I emerged from the grass and on to the paved trail I realized I was covered from the waist down in burs. These are the seeds from the tickseed sunflower which is an abundant plant in wetlands. It is often called by its generic name Bidens and is well-known by hunters and hikers who venture off trails.

On the way back to the car I saw a Pied-bill Grebe on the north lake and a small flock of ducks on the south lake that I was unable to identify because they were out of range of my binoculars.