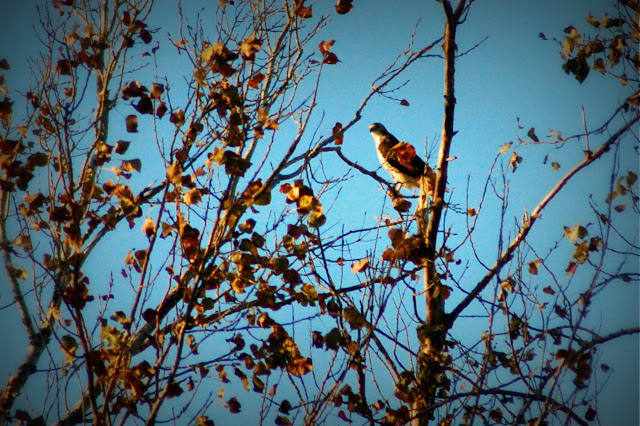 Red-tailed hawk views the landscape from a cottonwood tree losing its leaves on the northwest edge of Jensen's Pond, 10/7/12 (Kevin Kane)

I parked in the Harrison Road lot and scanned Pond H for birds. I spotted a large raptor standing in the dry grass on the north side of the pond which still has a little water in it. I started walking down the dirt trail toward the pond, all the while keeping an eye on the bird. When I reached the south edge of the pond, the bird flew up and over the willows and then down again somewhere along the upland trail. I was not able to identify it but it did not act like a Red-tailed Hawk. A redtail would have flown upward and probably landed in a tall tree. I suspect a Harrier.

I saw lots of sparrows as I walked along the shore of the pond. I identified Song Sparrow, Fox Sparrow, Harris Sparrow, White-crowned Sparrow, and American Goldfinch. I followed the paved trail around the north side of the south lake and spotted four Killdeer on a point west of the bridge. Met Wolf Oesterreich at the Leopold rock and we exchanged notes. As I walked along the east side of the lake, two birds flew out of the tall vegetation on the lake bank and landed on a utility line. One was a House Sparrow and the other an Eastern Bluebird. A flock of about 60 mallards were congregated on the shore and water near the outlet in the southeast corner of the lake. Among them were a Pied-bill Grebe, a Ruddy Duck and a Canada Goose that Wolf said is injured and has been here for some time. He also pointed to an immature Red-headed Duck that has been hanging around the mallards for a week or more.

Redheads are notorious for laying their eggs in the nests of other species. Usually the host species is the closely related Canvasback which nests in the same type of habitat. However, Redheads will lay eggs in any duck nest it finds handy. I suspect this Redhead hatched in a Mallard nest and then imprinted on the incubating hen after hatching. Redheads are not obligate “parasites”; they do build their own nests, usually in cattails over water, and incubate their own eggs. Redheads are not known to nest at Hayden Park so this bird was probably raised in northern Iowa or Minnesota.