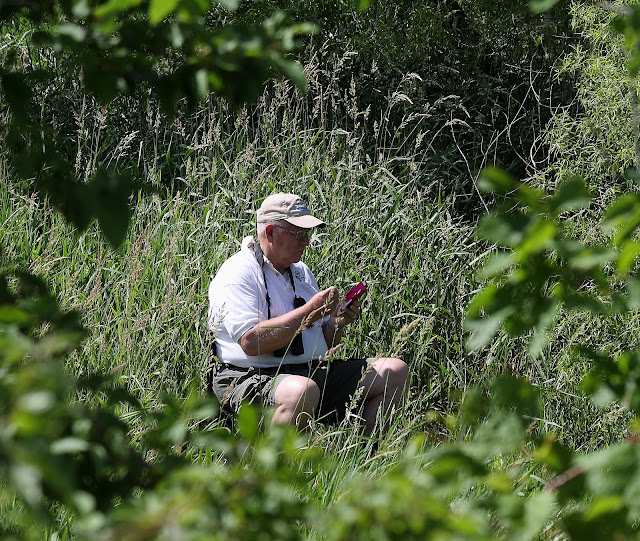 Erv Klaas writing down his Odonate notes while sitting in "comfort" at the west end of Jensen Pond, 5/28/12 (Wolf Oesterreich)

I walked along the north shore of the north lake this afternoon looking for dragons and damsels. Saw two male Familiar Bluets and a pair of Double-striped Bluets. Expected to see a lot more damselflies; several species have not emerged yet. This seems strange considering this was such an early year in the phenology of many species. I walked up to Jensen's pond where there was more activity. Male Common White-tailed Skimmers were patrolling the shoreline and chasing each other from territories. A female appeared and began tapping the water with her tail while a male hovered about 2 feet above her chasing other males away. She continued her egg laying for about two minutes. My reference book says that white-tailed females lay about 25 eggs with each tap and may lay up to 3000 eggs in her short life time. Wolf Oesterreich joined me for a while and we recorded Eastern Forktail damselflies, 12-spotted Skimmers, Dot-tailed White-faced Skimmers, Black Saddlebags, and Eastern Pondhawks. A black swallow-tailed butterfly settled on the moist mud near shore and we took several pictures. I also got a nice photo of an immature female Dot-tailed White-face.