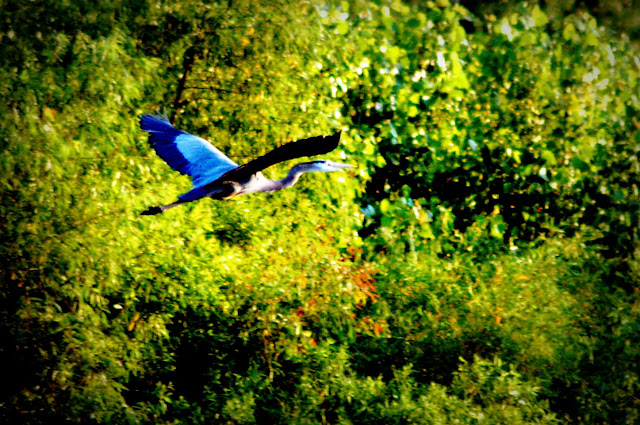 Saturday, June 23, 2012, 3-4 pm. Partly cloudy, slight breeze from the south, Temperature 78 degrees F.
I went to the park today to check on a site where several of us have been working to control a large infestation of musk thistle. As I passed by a wetland next to the path, I noticed a Great Blue Heron on the far shore of the pond. This wetland is gradually drying up and only a small shallow puddle is left. I looked at the heron through my binoculars and could plainly see that it had a large fish in its beak. On closer look, I identified it as a common carp that I estimated to be 12-14 inches long. The fish was cross-ways in the bird’s large beak. The heron stood there for several minutes holding the fish as if puzzled with what do to with it. But, of course, the heron knew. He (or she) tilted its head back and began to turn the fish so that the head of the fish was pointed down its throat. Then, with a big gulp, it swallowed it whole. I could see the large lump pass down its long narrow neck on its way to the stomach. A few minutes later, the heron flew off towards the north. I have seen herons eat fish a number of times, including catfish with their spiny pectoral fins pointed out but, this was the largest fish I have seen a heron eat. The National Geographic web site says that Great Blue Herons have been known to choke to death from trying to swallow a fish that was too large.
If you are interested, here is the address of a live cam of a heron nest in Ithaca, NY, where a large brood is nearing the time when they will leave the nest:
http://www.allaboutbirds.org/page.aspx?pid=2433.

While I was watching this drama unfold, several cyclists and runners passed by without even glancing at what I was seeing. I suspect many of the park’s visitors don’t take the time to view all of the natural wonders that are there.