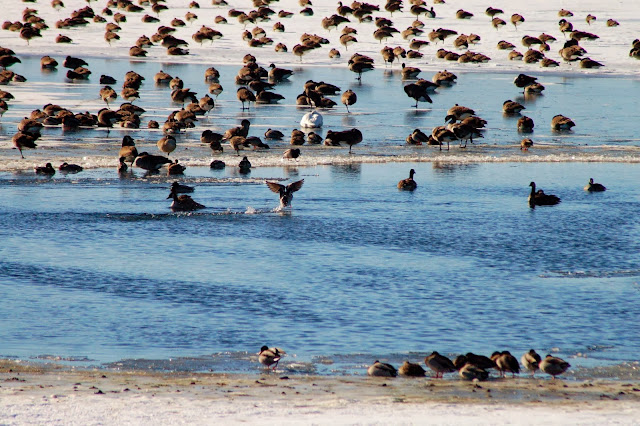 A variety of birds flock to the remaining open water in the south lake. 12/26/13 (Kevin Kane)

Sunny, bright sky, few clouds, slight breeze from south, 32-33 degrees F. The north lake is entirely frozen, 3 ice fishing tents. The south lake is also frozen except for a small area of open water near the east shore. About 4 inches of snow fell on December 21 and then it turned bitterly cold for a few days. Now, we are experiencing a moderate warming trend.

Today was my first visit to the park in nearly a month. For the first time in several months, I was able to walk the entire path around the south lake. I passed several walkers including a man and his son from San Diego who grew up in Ames and is back to visit relatives. He said they read the blogspot for Hayden Park regularly. They are bird watchers and, together, we scanned the flock of Mallards and Canada Geese sleeping on the ice around the open water. Small groups of Canada Geese flew in from across the highway; it seemed they were lifting off the Skunk River near the low-head dam north of Sleepy Hollow (Riverside Drive). Be sure and check the Hayden Park website for the latest goings on in the park and the beautiful photos contributed by Wolf Oesterreich, Kevin Kane and others. Here is the URL: http://adahaydenpark.blogspot.com/

I estimated 400-500 Canada Geese, 100 Mallards, 1 Snow Goose, 1 Trumpeter Swan, and 1 male Pintail. Most of the ducks and geese were sleeping on the snow-covered ice but a few birds were bathing in the open water. This is fun to watch. The birds will sometimes roll completely over on their back and wave their feet in the air. Then they will rise partly out of the water and beat their wings rapidly to shake the water out. This wing flapping is noisy and the sound carries well across the frozen lake. The green heads on the Mallard drakes were glistening in the sun. The swan had its head under its wing and remained that way for most of the hour that I watched it. A few geese were walking around the snow-covered ice picking at something on the snow. What could they be doing? Are they eating snow? Or, maybe they are finding a few small seeds that the wind has carried out on the lake.

Later in the walk, a couple from Gilbert stopped and chatted a while. Everybody, including me, seemed to be in good spirits with the sunshine and relatively mild temperatures.

I wish everyone a Merry Christmas and a Happy New Year.