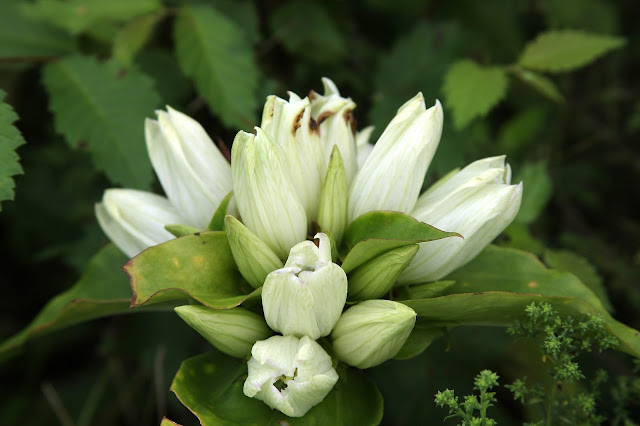 A stand with several Pale Gentians (Gentiana alba) was observed along the east side of the lakes trail (just north of the south lake's SE corner).  These flowers will not open up any further. 8/17/15 (Wolf. Oesterreich)

I parked in Calhoun Park and poked around the creek and rain garden there. Lots of water was flowing from the lake through the outlet to the Skunk River. The rain garden has a good diversity of plants although there is a willow tree in the middle that needs removing. I saw several butterflies feeding on Black-eyed Susan and other flowers including a Viceroy, Red Admiral, Tiger Swallowtail, Pearl Crescent, and Clouded Sulphur. Dragonflies present were Widow Skimmer, Common Green Darner and Black Saddlebags. I also spotted a Bluebird and an Empidonax flycatcher.

I then crossed Dawes Drive and walked westward along the paved path to the southwest corner of the lake. The vegetation in the savanna is doing well and will provide enough fuel this fall for a late prescribed burn. A burn is needed because there are still a few honeysuckles sprouting from old roots and stumps. I noticed that new grasses are growing along the edge and could be Virginia Wild Rye that the city planted to repair some damaged areas. Farther west in the edge of the savanna was a patch of slough grass and a clump of blue flag indicating moist soil from a seep. I saw a few more of the dragonfly species I mentioned above. On my return, I stopped to talk to a friend and we spotted an Osprey flying towards us from the east. Suddenly, it went into a steep dive and plucked a small fish from the surface of the lake. The Osprey then turned and flew towards the Skunk River.

I sat down on the picnic bench near John Madson’s stone and I was pleased to have Wolf Oesterreich come by on his bike. We exchanged notes and observations Wolf has made during the last couple of weeks. Before leaving we examined a small stand of Common Milkweeds for Monarch caterpillars. No caterpillars, but we did see a bunch of nymphs of the Milkweed Bug on the leaves.