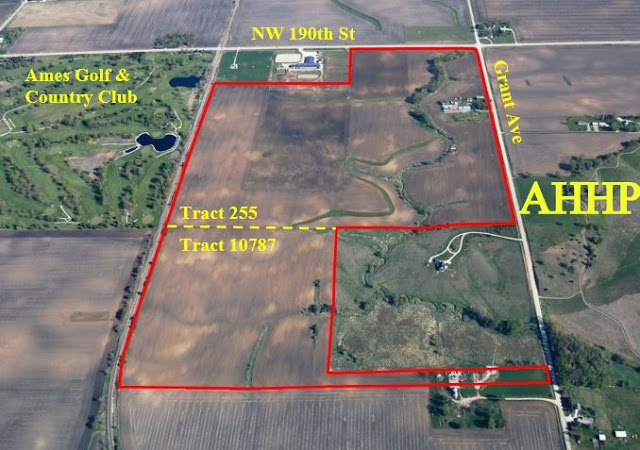 Many of you have probably been following the most recent goings on at City Hall about the housing development next to Ada Hayden Heritage Park. Here is a brief summary.

On August 11, a developer, Mr. Terry Lutz, asked the Ames City Council to make 13 changes to a pre-annexation agreement that had been negotiated with the previous owner of the property known as Rose Prairie. After his presentation, I spoke in opposition to many of the changes which would have negated many of the attributes of a low-impact (conservation) development that the city wants done so as to better manage the quality of the water entering the park from the surrounding watershed. In the discussions between Council and the developer that followed it became clear that many on the Council were not pleased with the proposed changes. Before the Council accepted or rejected any of the changes, a motion was made to require an east-west street through the development. The developer declared that this was a deal breaker and he stormed out of the council chambers. No action was taken on any of the 13 changes requested by the developer. I am sure we have not heard the last of Mr. Lutz.

I first became acquainted with the property now known as Rose Prairie in 2002, when the Story County Soil and Water Conservation District obtained a grant from the Iowa DNR to cost share conservation practices in the watershed. Our soil technicians quickly recognized this property as the key to preventing nutrients and silt from entering the park. It was already owned by a developer who did not want to share the cost of the conservation practices that were needed. Subsequently, several complications have prevented any housing development to occur and so the owners have rented the land to local farmers for growing corn and soybeans. Thus, the park has had to absorb the nutrients and soil pollutants these many years. A well-designed low-impact housing development would be a significant improvement over row crops. In my opinion, this latest proposal would not have done that.

If the City can not come to an eventual agreement with Mr. Lutz, perhaps it is time for the City to purchase this property and expand the park. After all, this is what we did to get the park in the first place. Anyone for a bond issue?

At last night’s Council meeting (August 25), the Council passed a motion to ask the staff to come up with a plan to monitor phosphorus in the lake and the streams entering the park. I hope the City moves toward a comprehensive assessment of the total daily load of nutrients entering the park. The long-term health of this important water body is at stake.