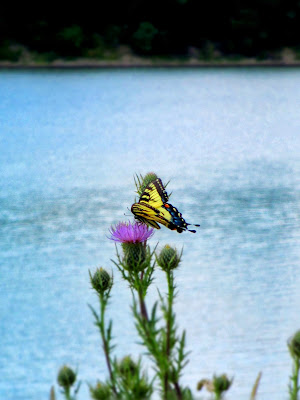 Butterfly on thistle sent in by Robin Ubben Kennedy.

It has been a while since the last Field Note, so, I have lots to report. Today, I parked at Calhoun Park near the lake outlet. No water is flowing out of the lake; the drainage channel to the Skunk River is dry. Many of the shallow wetlands on the west side are dry or nearly dry. However, the ponds near Stone Brooke are nearly full. This is not too surprising because these ponds are fed with ground water as well as surface water.

A flock of 33 mallards, some in eclipse plumage and some in juvenile plumage, were swimming together near the outlet. Eclipse plumage is the result of a full body molt of feathers that occurs in adults at the end of the breeding season. The juveniles are probably young that hatched in the park this summer.
Rob, who works for the Ames Parks operations staff came by on a small John Deere tractor with a side-arm rotary mower. He has been cutting some of the intrusive willow and cottonwoods that are growing along the main trails. He asked me about the small prairie planting in the southeast corner of the park near the restrooms. This area is being invaded with willow and cottonwood seedlings. Because this area can’t be conveniently burned, mowing will help control the woody vegetation. I asked him to delay the mowing until after the prairie plants have gone dormant and produced their seed crop, at the end of October or early November. He agreed to do that. While inspecting the area, I noticed a plant that I didn’t immediately recognize growing there. It is about 3-4 feet tall and has woody stems. I broke off a small twig and took it to campus and Deb Lewis confirmed that it is Illinois bundleflower, Desmanthus illionoensis, a native prairie plant in the Pea Family. It gets its name bundleflower from the bundles of seed pods that it produces. The leaves reminded me of a Mimosa tree that I have seen in the southern U.S. and Mexico. As a matter of fact, it is in the subfamily Mimosoidea and like Mimosa trees in the south it folds its leaves at night.
Yesterday, I was browsing around an area on the north shore of the west arm of the south lake when I spotted a small flower in bloom that I remembered seeing here in 2002. When I got home I looked up my old report of the park’s vegetation and restored my memory of it. It is Clammy weed, Polinisia dodecandra. It is in the caper family and grows in dry, sandy soil just like the place I found it. You can find more information on this interesting plant at the following web site: http://www.npwrc.usgs.gov/resource/plants/wildflwr/species/poladode.htm.

Dragonflies and damselflies have been slow in emerging from the water this year. I saw an adult male Flag-tailed Spinyleg on the north shore last Saturday; you may remember I mentioned seeing a newly emerged individual of this species in late July. The most abundant damselfly perched on the flowering heads of Sego Pondweed along the shore was the Orange Bluet. Wolf recently posted a beautiful photo of this species on the “Reflections” site. Check this site often for new photos and reports on nature in the park, especially Wolf’s monthly summaries of his observations.

Al Johnson sent me an alert that Musk Thistles were again blooming in places that he helped cut in June. I went out yesterday and this morning and looked for them. In the places, that he told me he had spotted them, I was glad to find only two species of native thistles, Tall and Field Thistle. These plants are just starting to bloom. I was pleased that I did not find any new leaf rosettes of Musk Thistle in the control areas. Hopefully, we are starting to get these aggressive non-native thistles under control. The native thistles can be recognized by looking at the underside of the leaves which are brightly white.

The week of September 8-14 is Iowa Prairie Heritage Week. We are planning two events at the park in recognition of our prairies. On Monday evening, Sept. 9, 5:30-7 pm, Deb Lewis will lead a prairie walk from the Harrison Street parking lot. On Thursday, September 12, 6-8 pm, prairie enthusiasts will share their favorite prairie writing, stories or poems in “Prairie Words”. We will meet at the Shelter House on the north side of the park and walk to one of the nearby prairies to share the readings. Bring along a folding chair and insect repellant. Both of these events are free and open to everyone.